There is one thing I know when it comes to Legos, the hottest ones are usually the comic con exclusive sets that are only available at the bigger conventions like San Diego Comic Con and New York Comic Con.

With SDCC 2018 about a month behind us now, let’s check on the Lego Exclusives that came out of the convention.

This year they had 3 exclusive sets to offer and 3 exclusive mini-figurines. Let’s start with the sets which included the Ant-Man and Wasp, Aquaman and The Storm and lastly the Star Wars Millennium Falcon Cockpit set.

A month has passed by and these sets are still selling quite well. Although since all are now on the secondary market, you can get most of these for far less than the initial hype. Listings that included all 3 sets were selling really well. To those that spent the $40 per set and got all 3 for $120, they were flipping them for $500 or more initially.

Ant-Man and Wasp sets are still doing quite well, holding steady around the $150 to $170 range, with the two most recent sales right at $170, one of them as an auction with actual bids. These peaked with a few sales in the $300 range but seems these quickly leveled out at their current price range mentioned already.

Aquaman and The Storm sets saw a peak price initially at the $400 mark with a couple sales but after more hit the market when people got their hands on them, these quickly dipped to the $130 to $225 range. Since then, the past few weeks still puts this set between the $80 to $100 range for a median price range. Those late to the game in selling these are still doubling their initial investment of $40 for the set.

Surprisingly the Star Wars Millennium Falcon Cockpit set didn’t see the same type of success as the Ant-Man or Aquaman, but did flirt around the $300 range but some of those sets seemed to include the mini-figures available or were bundled sets with Aquaman or Ant-Man set. It’s not a total loss though as the most recent sales were between the $100 and $150 range. 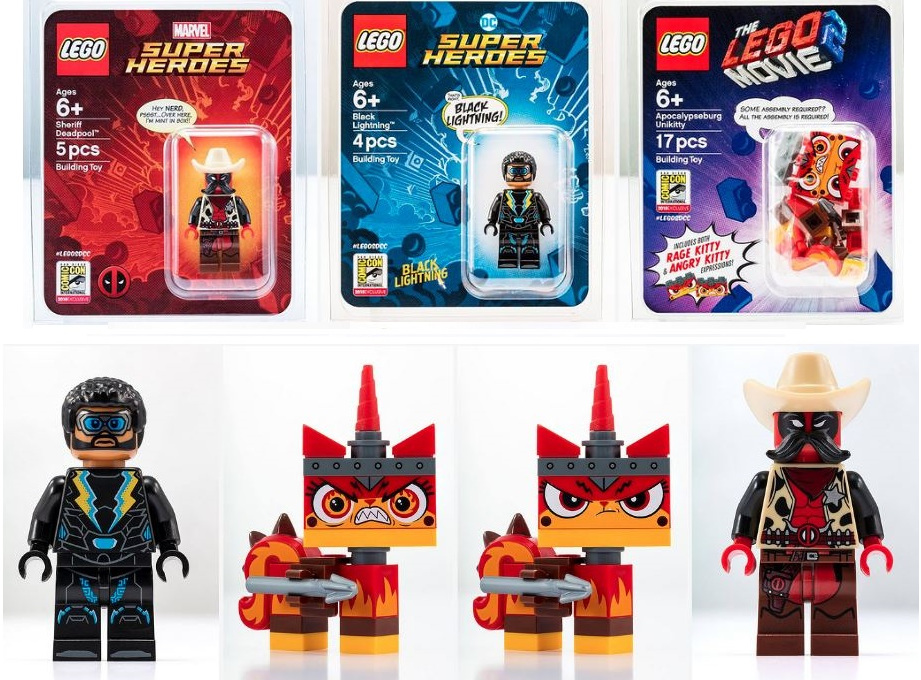 I’ve learned something over the years and that there are different types of Lego collectors. Some like their sets full and intact and then there are collectors who just want the mini-figures. So it’s nice when Lego creates exclusive mini-figures where one doesn’t have to buy an entire set just to obtain the mini-figures.

SDCC 2018 released 3 new mini-figure exclusives this year. We saw Black Lightning, Apocalypseburg Unikitty with both Angry and Rage face from the LEGO Movie and then Sheriff Deadpool.

Black Lightning aftermarket sales reached the $335 range but only two completed sales in the $300 range. This quickly became a $150-$225 figure and since then most sales put this one around the $100 range for the most part.

Apocalypseburg Unikitty with the Rage and Angry faces doesn’t seem to be getting as much love on the secondary market as the others. Actually out of all 3, I liked this one the most. I really enjoyed the LEGO Movie and loved this character within it. The highest sold listing went for $200 but this quickly became a $80-$100 flip. The lowest sold figure came in around the $65 mark. Still not bad for those who obtained and flipped, possibly pay for all their figures and sets but a far cry from the demand that some of the other sets saw or still commanding.

Sheriff Deadpool seems to be the most sought after mini-figure, with sales reaching a max of $400 and then sales in the $300 range. The cheapest sold listings were at the $150 range. The most recent sales still puts this figurine in the $200-$250 range for the most part. This is the figure to grab if you can find it for cheap.

So for all of you that missed out and couldn’t make it to the SDCC or even got into the Lego Lottery to actually buy these sets, if you got the cash now, you can certainly get these at lower secondary market prices from their initially hyped prices.

Next big convention is NYCC so I can’t wait to see what exclusives they’re going to be releasing as I will be at NYCC this year and will have updates as soon as I get them.